The Company of Myself Walkthrough 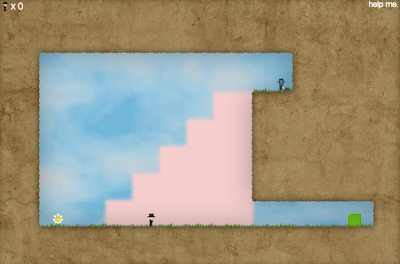 Depressing games? Depressing games. This is The Company of Myself, an odd platforming puzzler that puts you in the shoes of a man with some terrible socialization problems. Enjoy!

Move to the green square. Yay.

Jump over the platforms to get to the green square. Yay.

Hop across the free-floating platforms to the goal.

Run to the edge of the cliff. Hit Space to create a silhouette clone. Jump onto the clone's head to reach the next platform up. Continue doing this until you reach the tallest platform, whereupon you can jump down to the green square.

Jump down into the large space and run to the switch. Press A to get rid of the barrier. Hit Space to return to the top area, wait for your silhouette to hit the switch again, and run through to the square.

Run to the platform above the green square, positioning yourself directly above the square. Hit Space. After you're back at the flower, run through the force field (which blocks your silhouettes) and hit the switch. The silhouette will fall down onto the square.

Run against the green force field for several seconds (five or six). Hit Space and watch as your silhouette runs through the field to the goal.

Move through the stair-shaped force field. Hop each time you're under a new stair. Once you're under the switch above, hit A. Your silhouette will hop up the stairs and hit the switch, allowing you to run through to the goal.

Drop straight down into the pit below the force field, remaining still for a few seconds when you land. Walk from left to right without jumping and stop at the very edge of the cliff. Hit Space. Drop down onto your silhouette's head and it will walk you over the force field without falling.

Sit still for several seconds. Walk forward to the edge of the cliff and fall onto the force field. Wait for roughly ten seconds. Jump as far to the right as you can, and move a short distance to the right once you land. Hit Space. Back at the flower, immediately drop down from the edge of the cliff. Your silhouette will fall onto your head. Walk left to the opposite cliff and let your silhouette do the rest with its pre-recorded moves.

Move to the first switch, count three or four seconds, and pull the switch. Count again and move to the next. Count again, and again. That done, hit Space. Run across the platforms, counting down each time, so you're ready to jump each time your silhouette pulls the next switch. This requires some good timing.

Move to the green square. That done, hit Space to switch to the girl. Move her to the square as well. Romance!

Swap between the two characters as you move down the screen, hitting switches on the way to the goal.

Have one character stand at the bottom of the cliffs while the other hops on the first character's head. Make your way to the goal.

Ohh, the pain. Girl jumps on guy's head to reach the purple switch.

Run to the black switch and wait for ten seconds. Hit the switch. Jump up to the second flower. Hit Space to bring back the black blocks. Hop up them to the green square.

Standing still, jump once. Hit space. Jump again once your silhouette is in space so you land on its head. Hit Space again. Add another jump and repeat. Keep doing this until you create a tower of silhouettes on your head. Walk across the force field and use this tower to reach the green block.

Last one. Run towards the cliff edge and leap. Once you're out of sight, hit Space. Do the same thing. Keep doing this over, and over, and over. Eventually your guy will start landing on the heads of the silhouettes as he's plummeting. With enough work you'll be able to jump off of one of these heads and land on the platform with the green box. Enjoy the depressing ending!
Posted by SLTE at 9:27 AM