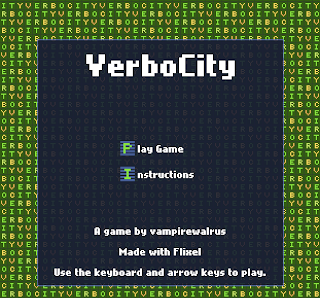 Ever thought of combining Scrabble and SimCity? Probably not, but it was inevitable that somebody would give it a stab. The result is VerboCity, an odd little sim game that only allows to build if you know your urban zoning terms. You can play VerboCity here.

Your goal in VerboCity is to accumulate as many points as possible. To this end you need to construct a city atop a large field of letters. The catch here is that you must spell out the name of the building you want to construct on each turn using the letters you 'capture' by laying down those same buildings. Any letters covered by a building go into a pool, displayed at the bottom of the screen, and each time you use one of those letters in a word you'll lose it from your pool. Build until you can't build no more.

So long as you know a smattering of building or area names, you'll probably breeze through VerboCity. The easiest way to set up your city is to use short, four-to-five-letter words (of which there are many) to quickly build up a large community. The various buildings vary in size depending on what you build, so it's typically best to create things that require few letters but take up a lot of space on the board. A few good examples are 'Hall', 'Farm', 'Forest' and 'Fort'.

Each time you build something, you'll expand the network of roads branching through the town. Any letters caught under roads won't count towards your pool, so it's wise to choose your plots carefully. The different types of buildings will also provide different attributes to your city; these are further detailed under Scoring. 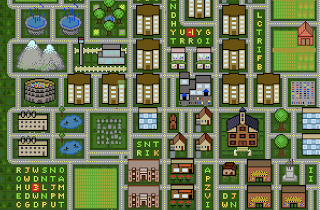 The beginning of a game of VerboCity is its most difficult phase. You begin with a single, pre-built Townhall to place which will determine your beginning pool of letters. Here are some tips for placing your Townhall.


Once the Townhall is down and the game's begun, you'll want to create a number of high-yield, low-cost buildings to quickly build up your letter pool. The above-mentioned buildings (Hall, Farm, Forest, Fort) are great for starting out strong. Place wisely and soon you'll have almost every letter covered. Make your city pretty if you wish, but the only hard-and-fast rule for placement is to avoid setting buildings directly on negative multipliers. Beyond that, as well as not wasting space with a useless network of roads, you're free to build.

Scoring in VerboCity is determined by the value of the buildings you lay down. There are a few factors which govern point totals:


Once you Retire from the main menu, the game will tally up your point total and compare it to built-in points to determine how well you did. 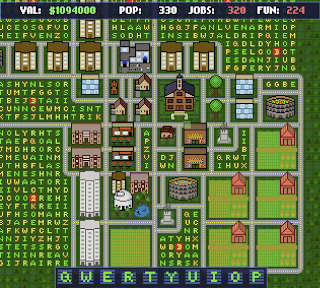 Below is a list of the words I've discovered work while playing VerboCity. Wield them wisely. It's not a comprehensive list, I have no doubt, so feel free to experiment. Note that there are no spaces in building names. (Thanks, Alphabetizer!)